Attention all “Selfie” takers: #selfiepolice want you to pay.
Two BYU students hope to turn “vanity into charity” by using social media outlets to fine fellow selfie takers. Their project, called Selfie Police, encourages people to donate $1 for every selfie they post. People can be busted by their friends or the actual Selfie Police with the hashtag #selfiepolice, letting them know that they have been caught. This ongoing project challenges people to think of others while thinking of themselves.
“We wanted to figure out how to get our generation to give,” said co-founder Chas Barton. “Instead of trying to steer people away from being vain, we decided to use that vanity and turn it into charity. That is where Selfie Police was born.”
The idea began during a competition held by the Laycock Center at BYU called 24hours of Creativity. While project Selfie Police (originally pitched as ‘Selfie Jar’) took second in the competition, nothing is holding back this movement. Selfie Police has already raised more than $1,600.
“The response has been amazing. A lot of people are grateful for what we are trying to do and are reacting really well to getting ‘busted’ for Selfies,” said co-founder Dustin Locke. “Almost instantly we had responses all over the world and received about 100 donations within the first two days.”
All proceeds go directly to a charity called Vittana through a PayPal link on the website. Vittana is an organization that gives student loans to students in developing countries who can’t afford college.
“We decided on Vitanna because we wanted the proceeds to go to people our age around the world who are wanting an education,” Barton said. Vitanna is “fighting poverty through education and we really liked that idea because it is directly related to our generation.” 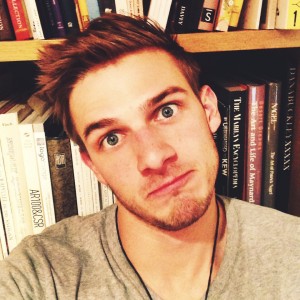 Chas Barton, Selfie Police co-founder, takes a selfie in the library. (Photo courtesy of Selfie Police.)
“Selfie” was Oxford Dictionaries’ word of the year in 2013 and according to Webstagram #me is the third-most-common tag on Instagram. While it seems the world has only recently become narcissistic, Locke and Barton think differently.
“I think the natural man is a little self absorbed,” Locke said. “Any generation would have done this, we are just lucky enough to have smartphones and social media. The minute social media came to be it brought with it the idea of, ‘It’s all about me and the world wants to know me.'”
Barton and Locke don’t want people to stop posting selfies, they want people to “think of others while thinking of themselves.” Their website gives tips on how to become part of the Selfie Police force, encouraging people to “bust” their friends and even offering three templates for calling them out in varieties of funny, snotty and nice.
“This movement isn’t aimed to harass and ridicule people,” Barton said. “It’s supposed to be something fun and light as people accept that they are a little self-obsessed. We say you can’t bust someone before you bust yourself because we are all guilty of selfies.”
Jimmer Fredette was busted by the Selfie Police on an Instagram posted by his wife Whitney. The Fredettes said their friends busted them with hashtags and they donated. “It was for a good cause. We didn’t feel threatened. It was totally funny and we were happy to donate,” said Fredette.
The next step for Selfie Police is making the movement popular worldwide. With responses from BYU basketball phenom, Jimmer Fredette and Neon Trees’ frontman Tyler Glenn, it seems they are on track. Currently their “most wanted” list, of who they want to fine, includes James Franco (@jamesfrancotv), Imagine Dragons (@imaginedragons) and King James (@kingjames). The Selfie Police say that these individuals owe countless ammounts of back-dated selfie dollars.
With high-quality smartphones, laptops, tablets and more, the millenial generation spends a lot of time on social media. Many of these devices contain a camera and even numerous picture filters, making selfies easy to take, edit and post. With the world at the fingertips of the common man therein lies the ability to obtain any information on the Web, and also the ability to post anything in cyberspace. So, is this vast access to techonology a bad thing?
“With every new technology there is good with bad,” Barton said of smartphones and in particular the two most popular selfie apps Instagram and Twitter. “We are taking something that could be bad and harnessing it into something good.”
Those guilty of posting selfies are challenged by the Selfie Police to pay up. Visit selfiepolice.org and donate your $1 for humanity. Then join the force and bust your friends and favorite guilty celebs using #selfiepolice.